This week I was on a call when someone with an appreciation for labor history asked, “With all of the high profile organizing in the news, are we in a Flint moment, or is this just a moment?” Great question.

The Flint sit-down strike was one of the most important events to spur the world of organized labor we know today. It resulted in a labor agreement that legitimized the United Autoworkers, who struck to gain recognition by General Motors. What started out as a quixotic battle in two small (but critical) plants ended up gaining the UAW official recognition which they rapidly turned into signing up hundreds of thousands of members and later the unionization of the entire auto industry.

After decades of declining membership it is a great question – have we reached another Flint moment? Or is this massive increase in organizing an anomaly?

With the first quarter of 2022 in the books, this is clearly a year in organizing like we haven’t seen in more than a decade. Just look at how first quarter 2022 stacks up against the last five years: 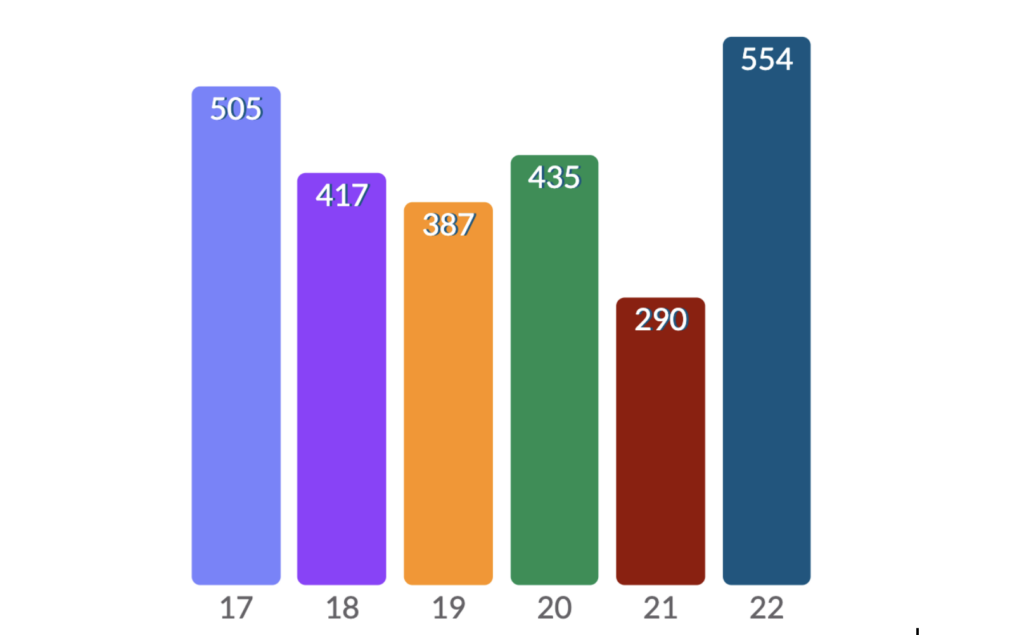 Note that there are still two days of petitions not added to the 2022 bar. I anticipate we’ll have at least 60 petitions above 2017, or about a 12% increase.

I mentioned last month that the biggest explanation for this increase is Starbucks. Starbucks locations had 164 petitions filed this quarter (and there will certainly be a handful more before the calendar flips over to April). Clearly the numbers overstate the total amount of organizing happening across the US. If you take away Starbucks, organized labor would consider this quarter a major disappointment.

At the same time, there are some interesting comparisons to Flint. There was a strong pro-labor President, Franklin D. Roosevelt, who managed to get the National Labor Relations Act adopted just over a year earlier. The country was trying to pull out of a depression, the labor market was in flux, and it was about to be put into even greater flux by World War II. The result was a massive increase in worker leverage. Companies were eventually able to absorb increased labor costs due to the fact that America became the defacto supplier to the world during the aftermath of the War. The conditions couldn’t have been better for organized labor.

There are important similarities and differences between 1937 and today. At the outset I’d point you to the book Pendulum that I’ve referenced many times before. Its basic point is that there are meta trends that repeat over generations, swinging from an apex of “me” (greed is good) to an apex of “we” (witch hunts), before swinging back the other way. The last time we were at an apex of “we” was around the same time as the Flint sit-down strike. The next apex of “we” is in 2023. All you have to do is look around to see example after example of “we” oriented behavior in our world, but one of the tell-tale signs of an apex of “we” is increased populism, protests, and labor unrest.

The labor market and worker leverage dramatically shifted throughout the pandemic and in ways we are just beginning to understand. I pray we can avoid another World War, but even without a major conflict the labor market and supply chain issues (along with inflation and other economic pressures worldwide) are not going away quickly or without more pain. And there is every possibility that the pandemic will continue disrupting our lives and economy for the next few years.

All of this disruption has created another moment for organized labor. How that plays out remains to be seen. Unions are opportunistically taking advantage of the moment. When I look at the Starbucks campaign I see a lot of organic organizing much more akin to a Saul Alinsky campaign than an SEIU campaign.

I don’t think over the long term this dynamic is great for unions. For unions to “win” in this moment they ultimately need to bargain contracts that deliver real benefits to lots of workers who see enough benefit to justify paying dues. And organizing 30 baristas at a time whose goal is to topple capitalism is a lot different than the situation in Flint in 1937. While the SEIU has won nearly all of the Starbucks elections, the latest ones are being decided by a handful of votes with low voter turnout. How engaged will these workers – who aren’t even participating in the initial elections – be when it comes to bargaining a contract for more than a year? My guess is not much.

The frustrations that led to this moment for unions will eventually turn against the promises, myths, and misconceptions unions perpetuate about what they deliver for working people. That doesn’t necessarily mean workers will no longer want to change the rules or the economic system, but it doesn’t necessarily bode well for organized labor. I wouldn’t be surprised to see general strikes (May 1st is just around the corner) and other protests. But I’m skeptical that this is organized labor’s Flint moment revisited.