Thanksgiving is my favorite holiday, and this year was no exception. I was able to unplug, spend time with family and friends, and Michigan (finally) beat the team down south, which just makes the whole world a little bit nicer. But now we come into the home stretch of a barnburner of a year for organized labor. Next issue I’ll make some predictions for 2022, but today let’s look at a few of the big stories from the last month.

Unions have a lot to be thankful for this year. They somehow managed to become cool again. John Oliver roasted so-called union-busting companies and consulting firms – including our “euphemistically named” one – for over 20 minutes on his show. And if you saw it, you’re probably thinking the same thing I did: “John Oliver is still on television?” The “most pro-union president in history” has his full starting lineup on the labor front, and the NLRB will soon be mowing down labor precedent like a John Deere combine. Speaking of John Deere, we just made it through Striketober, followed immediately by Strikesgiving (apparently every holiday now gets to include strike at the beginning, so stay tuned for Strikesmas). From media coverage you’d certainly think that there was a big increase in strikes this year. What’s the reality? There are really several stories here. First, strikes are still rare, especially large strikes. Here are the BLS numbers. This chart doesn’t include the Deere strike, or a number of narrowly averted strikes (the threatened IATSE and Kaiser Permanente ones for example) that would qualify. But that last bar will be well below 50 this year. So big strikes are definitely not back.

What about smaller strikes that don’t make it on the BLS list? Understanding this number has always been difficult, and it’s especially so since the FMCS decided to basically quit tracking them altogether. But the Cornell ILR School is filling that gap. While your mileage may vary about their methodology, it is a reasonably comprehensive list of protest and strike activity that doesn’t make it on the BLS list. What does that data show? That Striketober ended with more of a whimper than a bang. This chart represents the total number of strikes and protests tracked in 2021 by month: 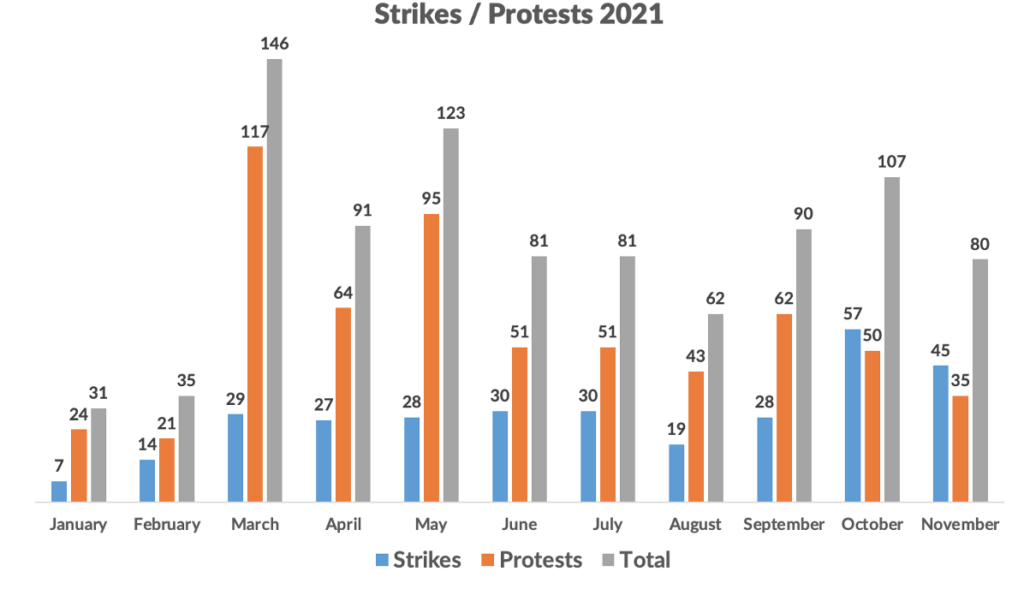 Looking at this chart you’d obviously conclude that “Striketober” had substantially more strikes than any other month in 2021. But here’s the problem with the ILR methodology. They count a “walkout” of any length as a strike. That inflates the numbers dramatically. For example, one of the big stories in October was the so-called strike against Netflix for the Dave Chappelle standup special. But that “strike” was basically astroturfing and some Netflix employees closing their laptops for a couple of hours. While that is technically a work stoppage – some people stopped working – it certainly isn’t what is traditionally considered a strike. If you instead only count work stoppages of two days or more the numbers look like this: 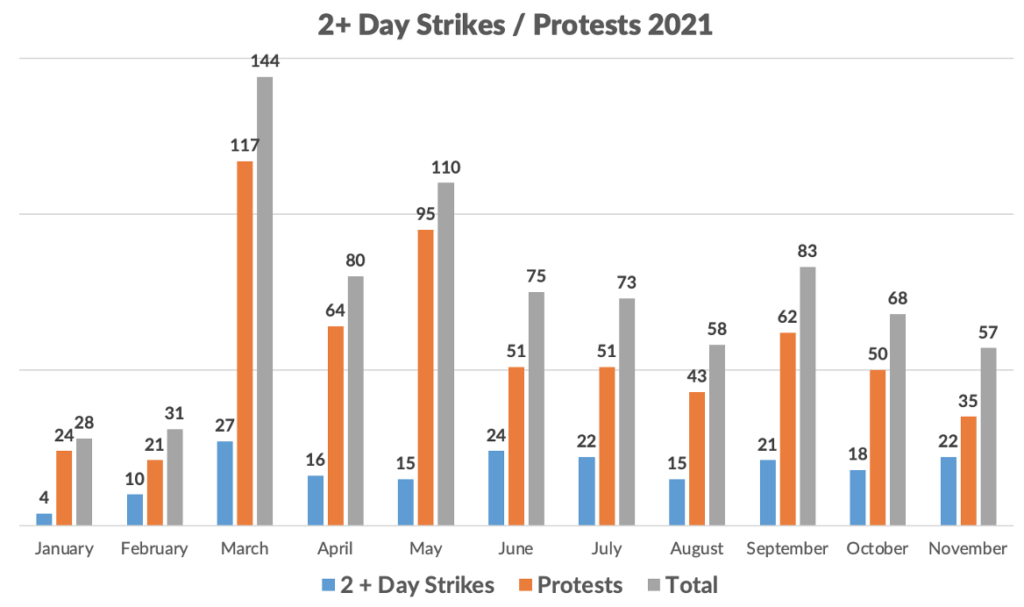 Using this measure of strike activity “Striketober” was a bit of a snooze, getting topped by five other months this year. Like a lot of labor stories these days, this was a lot more smoke than fire. This is not to say that strikes aren’t happening at an increasing rate. While the statistics show Striketober was really no more than an effective PR campaign, I fully expect these numbers to increase dramatically next year, especially as major labor contracts expire (see Teamsters below).

Here are some other statistics you should be watching from our team at LRIrightnow. RC petition activity exploded over the last two months. Here are two charts to illustrate. First, this is overall RC petitions from January 1 to November 30 over the last five years. From this chart it’s easy to see that Covid dramatically impacted RC activity this year and last – we are just over 2020 numbers and much lower than 2016-2019: 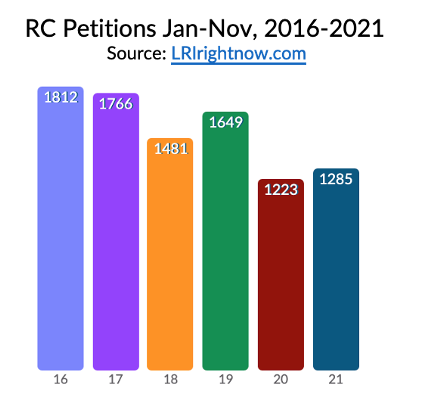 Now look at RC petitions from October 1 to November 30 over the last five years: 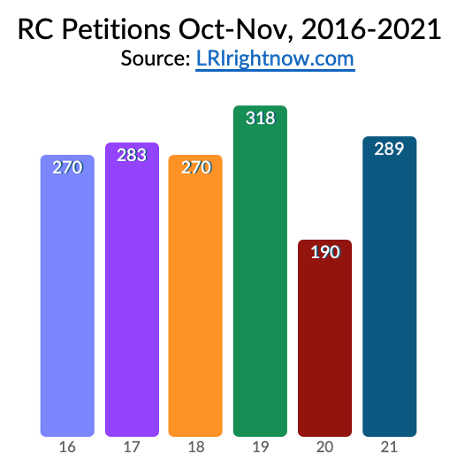 Sean O’Brien overwhelmingly won the election to decide the next International President of the Teamsters Union, taking over the union run by James P. Hoffa for almost a quarter century. He’s wasted no time laying down the gauntlet for UPS, Amazon, and non-represented units in many other industries.

This is a huge win for the Teamsters for a Democratic Union (TDU)-backed “OZ” coalition. But it’s one thing to be the protest party. Now in charge, ruling over the IBT is not going to be easy. This election was essentially a referendum on whether IBT leaders are willing to take on UPS, and most anticipate a strike in 2023 (including O’Brien). Hoffa nearly lost his Presidency in 2016 due in part to frustration in UPS dominated locals. Then in 2018 Hoffa jammed through the soundly rejected UPS agreement using the infamous “2/3 rule.” That decision effectively ended the Hoffa era. Hoffa announced his retirement, and the 2/3 rule was eliminated at the last IBT convention. However, there are a lot of old school, non-UPS locals that aren’t big fans of the TDU. They’ll become the new protest party inside the IBT. And while the O’Brien-Zuckerberg ticket won their election by a 2:1 margin, they also won with incredibly low turnout. That apathy certainly doesn’t indicate a mandate for the big changes and battles the new-look Teamsters are planning. Be on the lookout for some housecleaning, especially in locals that voted big for the Teamster Power slate. Fasten your seatbelts. 2022 is going to be a wild ride.