Have petitions really rocketed up 57% over the last six months? That’s what the NLRB announced recently in a plea to Congress for more money to run the agency. And article after article talks about the resurgence. Activity has certainly increased, especially if you consider the nearly 300 Starbucks petitions filed since last August. But are NLRB petitions really surging? Not so much.

One thing you might recall that happened during the winter of 2020 and spring of 2021 was that much of the country was still dealing with a surge in pandemic cases. There was a massive decrease in activity during the early phase of the pandemic (the NLRB was closed for nearly a month) and petition activity remained depressed throughout 2020 and into the winter of 2021 as Covid cases spiked again.

While Covid cases surged again during December and January of this year, activity in the labor relations world was much less impacted than it was in 2020 and 2021. Looking at data from our LRIrightnow libraries, here is a comparison of petition activity over the first half of the last five fiscal years: 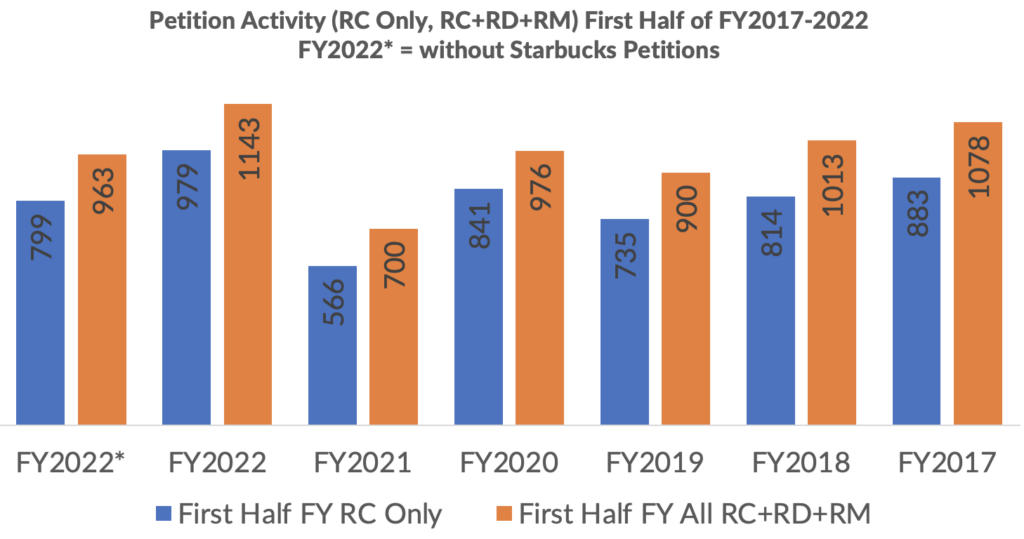 The NLRB press release looks only at FY 2022 versus FY 2021. That (ridiculous) comparison shows about a 60% increase.[1] It is worth noting here that during the first half of FY 2022, 180 petitions were filed at Starbucks locations. It is obviously correct to count those petitions–the NLRB has had to process and conduct elections in those cases. However, these petitions remain an anomaly. While the Starbucks campaign may very well generate a tsunami of additional organizing activity, that hasn’t been the case so far. If you remove the Starbucks campaigns, petition activity is well below the average of the prior non-Covid years.

Even when you include the Starbucks petitions, all petition activity averaged 992 petitions over the prior four non-Covid years. This means the first half of FY 2022 is up about 15% over the average. It’s an increase, but much less remarkable than the NLRB would have you believe. And the pace of Starbucks petitions has cooled off over the last month, so it is plausible that even the Starbucks bump will disappear in the last half of this fiscal year. 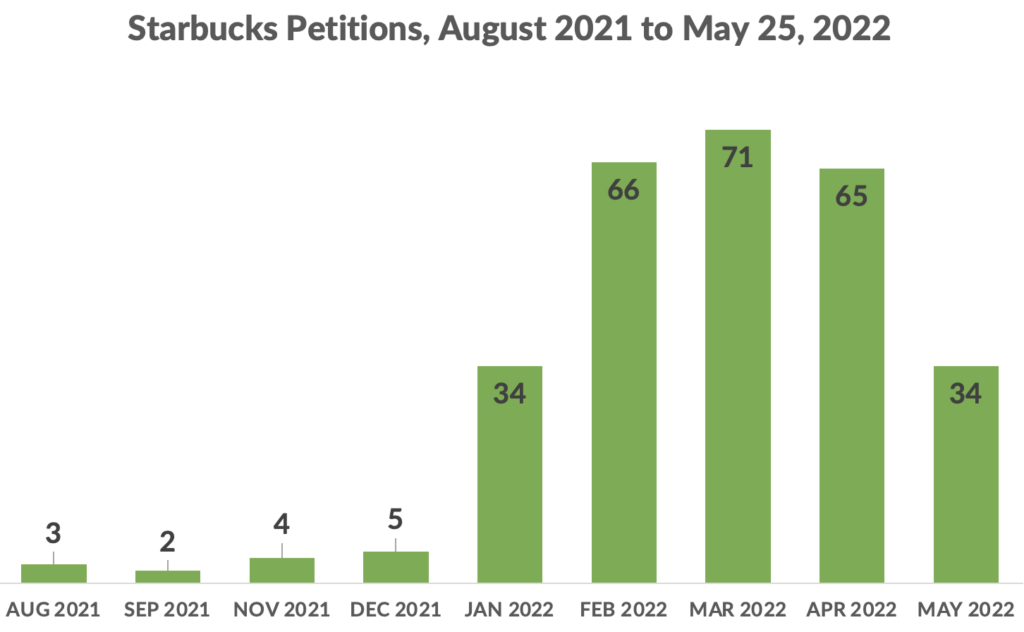 One other thing to consider. Even if you grant the NLRB claim that petition activity has surged, this doesn’t in any way suggest that the total activity at the NLRB will be any greater this year than in the last five years. The chart below shows what fiscal year 2022 would look like if you extrapolate numbers from the first half. One approach is to double the first half numbers. This is probably the most accurate way to do it since it appears that we’re not through the Covid woods yet. But if you wanted to include a post-Covid surge in petitions like we saw with Starbucks in the first three months of 2022 (the second quarter of the Board’s fiscal year) you could just multiply that number by four. Below you can see how both calculations compare to the non-Covid years of fiscal years 2016-2020. 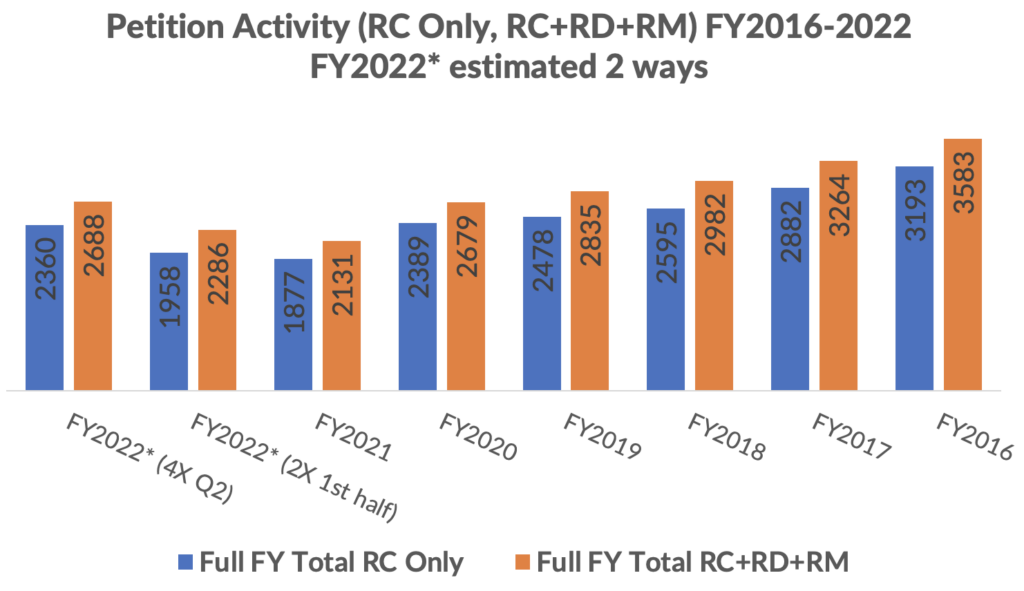 Either approach yields the same conclusion. Activity may fall short of the numbers we saw in the pre-Covid years, even with all the pixels spilled about labor’s resurgence. The Starbucks campaign is a remarkable organizing success story, and it may yet generate a surge in organizing–it is much too early to tell. But at this point I feel like the news of labor’s resurgence is overblown. Which brings us back to the NLRB’s budget request.

The NLRB press release includes its justification for a requested 16% increase in appropriation funding. The Agency has received level funding since FY 2010 of just over $272 million. The NLRB argues that inflation has eaten away at that appropriation amount, and it is now an inflation-adjusted $205 million or a 25% decrease from FY 2010 funding levels.

In fiscal year 2010 the NLRB processed 4,340 petitions (3414 RC petitions, 926 RD, and RM petitions). That’s a 51% decrease in petition case volume compared to FY 2021, and a projected 47% decrease in case volume for this fiscal year. If anything, this suggests that even another flat appropriation isn’t justified.

But I don’t think the reason Congress has refused to increase the budget at the NLRB for more than a decade is because of declining case volume. It is because the agency’s credibility is shot, no matter which party is in charge. And the announced lineup of decades-old precedent that is about to get tossed out the window is probably not giving many in Congress a warm fuzzy about this year’s appropriation either.

[1] The NLRB numbers include a small number of petitions for unit clarification, deauthorization, conversion of pre-hire construction units, and amendment of certification petitions which we don’t track. This explains the small difference in the numbers here.